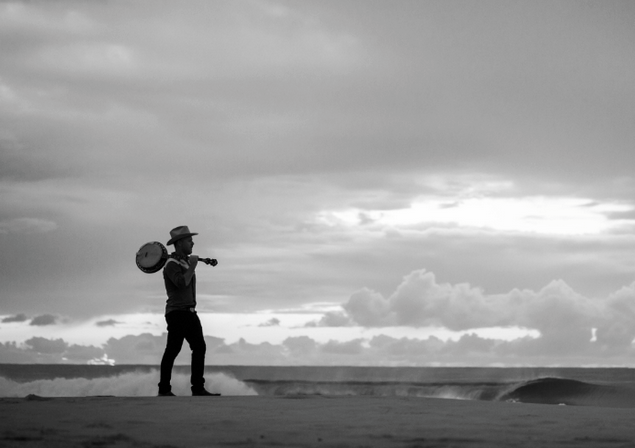 Bleach*, the Gold Coast’s biggest arts and cultural festival, kicks off on Friday 6th March (lasting until the 22nd) and brings with it art installations, theatre, film, street parties and, of course, live music. In Up Close with Bleach, Liz Ansley gets to know some of the incredible local talent who’ll be playing at Bleach* 2015 a little better.

Two-time Q Music Award nominee Pete Cullen spent three days in Brisbane’s painfully hip but always charming West End recording his sophomore album, Saltwater Cowboy. It’s an effort in soul-baring authenticity, something Cullen strives to emulate in his life as well as his music. Pete Cullen will be among the first musicians to play at Bleach*, as part of The Toolona Street Festival on March 7.

My music is country/folk music inspired by the oceans, lands and the people of Australia.

Bleach is right up my alley as I lived in Noosa Heads for 10 years and ran the local surf shop Noosa Longboards. I have been very inspired over the years by Gold Coast surfers Michael Peterson and Rabbit Bartholomew. My Latest single Saltwater Cowboy film clip features footage of them surfing Burleigh Point. Check it out.

I bought the Bruce Springsteen album Born in the USA when I was 9. I think it really formed my story telling and songwriting. There are so many hits off that album, the beauty is none of them have “pop” lyrics, they all tell a personal story that hits you right in the gut!

In 1987 I was washing the windows of my Mum’s shop for a couple $2 a week. After 3 weeks I saved enough money to buy Paul Kelly’s To Her Door single on vinyl. Again that song really struck a chord, I don’t know why as I didn’t come from a broken home. Paul Kelly’s ability to translate a story with simple chords and words that the average punter can understand is incredible.

The 1971 cult surf movie Morning of the Earth has an epic sound track. It was the first soundtrack to become a “gold” record in Australia. When I worked in the surf shop I would have the dvd on loop. G. Wayne Thomas has some classic tunes on that album. I feel like surfing just thinking about it! Watching movies like that really inspired the surf element to my music.

At the first band meeting of my first band The Daybridges we set a goal. It was to support You Am I, it took 5 years. We where the main support at a sold out show at The Zoo in 2004. Meeting and performing with our high school idol Tim Rogers was awesome. Tim lived up to all the rumours and expectations.  Evidently it was our last big gig as we broke up a few months later!

Basically I just want to keep writing and performing. I will be touring around Australia a bit and hopefully might get overseas if I’m lucky!

Surfing! I broke my ankle and tore the ligements off the bone in 2014! I couldn’t surf for 10 months and am still struggling with agility, so I’m really looking forward to some 2 foot crowded surf to get back into it!!!

Video of the year finalists reveal their favourite music clips

We all connect with music in different ways and for some it’s the full audio-visual package that gets a song over the line. The…